Head of this department is Deborah Pyne – deborah.pyne@Camden.gov.uk

Here is an image of a Camden Mobile Patrol vehicle: 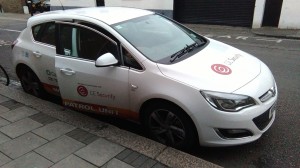 Please read below for the explanation Camden have given as to what Mobile Patrol do and their hours of operation.  (This information was provided by Rhianne Ford of Camden when requested by the TRA in April/May 2016)

There are 14 staff within this Camden department.  They work on a 4 – ON and 2 – OFF rotational pattern for 365 days a year.  Eight (8) staff work between the hours of 6.00pm in the evening through the night until 2.00am in the morning.  There are 4 Mobile Patrol vehicles that patrol the whole of the Camden borough.

Provision of a responsive mobile security patrol to Camden’s housing estates. The team helps to ensure there are reduced instances of anti-social behaviour around estates improving security, providing reassurance and gathering intelligence for residents.

Where a location has been identified as experiencing repeated anti-social behaviour, the mobile patrol team are deployed consecutively to reduce, minimise and remove residents experiencing ASB activities back to back with the aim of deterring, disruption and dispersal.

The mobile patrol team operate as the first point of contact, in the evenings, to assess and witness cases of anti-social behaviour.  Once a problem has been identified the mobile patrol officers either step in to mediate a satisfactory outcome or escalate the matter for more appropriate action to be taken.

Between 6pm and 2am patrol teams conduct routine checks of housing estates across the borough as well as responding to direct calls from Camden residents who are experiencing anti-social behaviour, aiming to arrive within 30 minutes. Each call to the team is logged and a report is generated following the visit. These reports are then assessed by Council offices and are shared with partner agencies where applicable.

The mobile patrol team aims to deter and disrupt groups of people causing anti-social behaviour and will work with other services including youth engagement teams, street wardens and the safer streets team to reach a resolution. The team both liaise and work with Council officers, the Police and other partner agencies providing intelligence about anti-social behaviour within the Borough.

It is very difficult to say what the patrol officers will not do as they are always asked to attend and assess all jobs which come into the service. If a type of job is received into the patrol it will directed to the appropriate dept.

Housing Patrol Officers are an Engagement service and have no powers to detain / arrest individuals whilst carrying out their roles. We actively work with other services i.e Police / Street wardens / Other agencies should something need escalating. We also do not issue fixed Penalty Notices

In relation to asking young children their names etc it was at one point not considered a good idea if the Children were below a certain age to be challenged by the Housing Patrol Officers. Due to Enhanced CRBs being carried out on the staff we can ask the children however we are unable to force the issue if they do not wish to provide their details.