Please scroll down this LONG page of info and pictures (where possible) of works that have been completed. Thank you.

New Football Signs: New signs were put up in all entrances to all blocks.  These  display a gridded map of the estate, showing the ONLY authorised area where ball games are allowed to be played (after much discussion over the last years).  There is also a written explanation as to how this decision came about.  (31st July 2017.)

Boundary wall opposite Farndale House.  This wall belongs to the gardens on Priory Road and the repair to this wall will be paid for by them.  The trees in their gardens have put pressure on the wall and made it unsafe.  The work was carried out in May/June2016. (Contractors mistakenly started work on this wall on 14th jan 2016 for a few days until it was discovered that they had the wrong wall!! That work was halted)   We can confirm that this will be of NO COST to any leaseholder or Tenant following challenges made by the RTA on this matter.  Leaseholders are to check their Service Charges Full breakdown of Repair costs to ensure that no work or consultation referring to this Boundary wall appears on their bill.  Please check the list of “Non Chargeable Job Nos” on the “Major Works & Repairs” pink tab on the Home Page.  The owner of one of the private houses, erected metal poles on “our side” of the wall, in order to hold up a fence above his wall.  He did not seek permission from Camden to do this and was asked to re-instate as before.  He “compromised” by painting the metal poles the same colour as the bricks.

Boundary Wall  Repair – NO CHARGE! – (Job Nos: 1727599/1 and 1718897/1 and 1713306/1 are NOT rechargeable to ANY LEASEHOLDER at Kilburn Vale.)Damaged wall opposite Farndale House.  This had wooden supports holding it up since approximately March 2012.  A consultation process started in September 2014. The wall needed to be repaired.  It was only through the TRA questioning whom the wall belonged to, that Camden were able to confirm it did not belong to the Estate and therefore, although it needed to be repaired – would NOT be charged to residents.

Refuse Chutes sealed up: Finally after years of Residents’ request, all chutes on all landings of all blocks have been sealed up.  This was requested because the size of these chutes is not sufficient for modern sized rubbish bags.  As well as too many blockages being caused by inconsiderate residents who were putting inappropriate and over-sized objects in which caused regular blockages.  The minimum charge to unblock a chute was £45 and this was averaging to £1000 per year to the estate! (Feb 2016)

Barrier Gate between Holmesdale and Pub: The missing post has finally been re-instated and the barrier gate will soon be kept closed again.  All emergency and Veolia vehicles will have a key.  Residents who have parking bays or garages on the estate will still be able to enter easily from the “drive” to the left of Holmesdale House.(Oct 2015)

IRS – TV Digital Aerial  & Associated Works (All blocks): Although this work was carried out in the summer of 2010 – it was not invoiced until August 2015.  Camden Council were within their rights to charge because they sent a Section 20B Notice, 18 months after the work was done.  Sending this document, keeps the bill “live” as it were, and in so doing, all leaseholders must pay this invoice.  (For future reference: As long as Camden sends out a Section 20B Notice after 18 months that the work is completed, they are not obliged to send any further documentation and the work can be billed any time after that).

TV Aerial (repair) at Bishopsdale House – TV signal went on 16th July.  This was reported by the Caretaker and several residents and was fixed by Evans & Shea, the sub-contractors of Lakehouse, on 23rd July 2015.  There had been a power cut so no access to roof was required.  The engineer was able to fix this inside the Electrics cupboard on the ground floor of the block. (24th July 2015).  Job No for this is: 1871829/1 – for those in Bishopsdale to check against their breakdown of Service Charges/Repairs when it will be billed.

Scaffolding was erected on 8th June 2015 by Lloyds Scaffolding.  Ashphalting/Aquapoling was carried out to repair a leak into flat 16.  This work was completed and scaffolding came down on 9th July 2015.  The Job No for this work is: 1860849/1 – so that those who live in Marshwood can check it against the breakdown of Service Charges/Repairs when it will get billed.

Before and After Pictures here below: 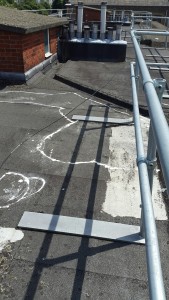 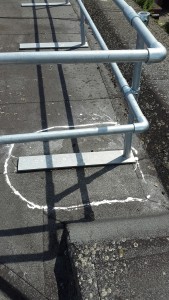 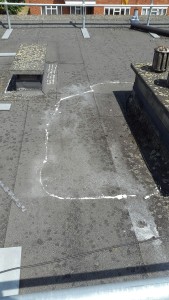 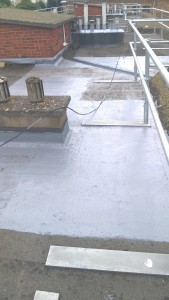 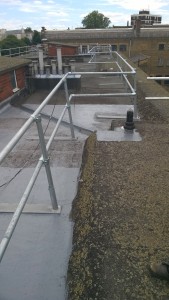 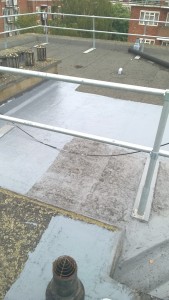 Water Tanks – Old ones removed and new Fibre glass ones installed on roofs of all blocks (March 2013).  Those in Farndale House had their bill capped at £250 per property after a Leaseholder challenged the bill.

The TRA challenged Camden for two years on this issue.  Camden maintained that the TRA was “not recognised” although it was “registered”, meaning that Camden would not accept challenges made by the TRA on behalf of all.  Despite the fact that Camden had dealt with the TRA on all previous issues, Camden insisted that they were not legally bound to accept the challenges put forward by one individual for the entire estate.  The full amount of this invoice was therefore recoverable by all blocks except Farndale.  The TRA forced Camden to put in place all that is required to ensure that the TRA will be consulted and is able to represent the group for all future works. Before and After pics of the water tank works are here below – click to view.

Before Pics for Holmesdale

After Pics for Holmesdale001

After Pics for Bishopsdale No Before pics available

Heating – the communal boiler which served the entire estate was removed and replaced with Individual Boilers within each flat.  (July – Nov 2011)

Boundary Wall (Job No 1746234/1) – In front of Bishopsdale House and bordering with The Bird in Hand Public House’s land – This wall had become unsafe due to roots growing underneath it from adjacent bush.  The middle section of this wall was knocked down – entire roots taken out, ground treated and wall rebuilt. (Jan 5th – 19th 2015).  It was confirmed that this is a PARTY wall with the pub by Harshad Pankhania/Chris Fallon and so only 50% of the overall cost can be charged back to us.  Please note that this cost will be an “estate” cost so we will all pay a 115th portion of the bill.  The cost of this work, prior to final adjustments is £6,544.49.  Camden can only recover 50% of this amount so each leaseholders’ contribution will be a bit more than £28 each for this work. *** Please also note that Job Nos: 1686861/1 and 1747846/1  in respect of this work are also Cancelled – agreed by Martin Fox and Chris Fallon of Repairs Dept prior to the work commencing.

Boundary Wall  (1727599/1 and 1713306/1 and 1718897/1) – ALL these job Nos are CANCELLED)– Wall opposite Farndale House – Section 20 issued in Autumn of 2014.  Consultation was carried out, Residents made observations, Camden responded and confirmed in April 2015 (Giulio Bergonzi) that although this work will be carried out, (approx. time scale is 6 weeks, commencing in August 2015), it will not be charged back to leaseholders as the wall belongs to the Private Houses in Priory Road.  **ANY work pertaining to this wall and the wooden struts which were erected 3 years earlier (2012) CANNOT be charged back to leaseholders.  The work was carried out in June 2016 and lasted 6 weeks.  The owner of the wall (Priory Road freeholder) chose to erect metal posts on the Camden side of his wall.  Camden Council are currently dealing with this issue as Residents of Kilburn Vale hi-lighted that this was not acceptable since he would not be able to maintain the posts from his side.  These should have been erected on his side of his wall.  Further details will be added as Camden concludes this.  Please remember Camden Council has confirmed that NO CHARGES can be made to leaseholders for any of the work to this wall. (August 2016)

Roof Safety Rails – These were added to roofs of all 7 blocks on the estate for Health and Safety upgrades at the same time as the Water Tanks were renewed. (March 2013)

Access Ladders – Installed at the top of all blocks for Contractors to gain easy and safe access to roofs.  (March 2015)

WALLED GARDEN surrounding wall – approx. 14 cuts were made all the way around this wall where rods/resin was introduced and in some places, bricks replaced.  This was concluded by end of November 2015.  Work was carried out by Building Homes – a sub-contractor of Wates.   (August 2015)